Objective:  Hydrocephalus is a major cause of morbidity in the pediatric population, with potentially severe consequences if left untreated hydrocephalus.

Endoscopic third ventriculostomy (ETV) has become the method of choice in the treatment of obstructive hydrocephalus. However, age, ventricular anatomy, and etiology could determine success rates (SR) of ETV. The aim of this study was to identify putative factors that could influence the outcome of ETV in children.

Methods: Clinical data of 148 consecutive patients under 18 years of age who underwent 150 consecutive ETVs from January 2000 to January 2019 were reviewed. Data were analyzed with regards to clinical and radiological SR. The actual long-term SR was compared to that predicted by the ETV Success Score (ETVSS) model.

The lower SR after ETV in young children may be explained by the poor CSF reabsorption capacity of newborn infants due to immaturity of the arachnoid granulations;

Univariate and multivariate analysis showed in our series that both the etiology of hydrocephalus and patient´s age group were relevant factors predicting success.

A literature review showed that SR in children under 6 months of age ranged from 32% to 45%, and in children older than one year it ranged from 56% to 71%. A few studies have analyzed the postoperative course and SR after a period of 3 years.

Conclusion: ETV is safe and effective in children. In this series, the age of the patient and etiology of hydrocephalus were related to SR. Also, the ETVSS was accurate to predict outcome. Intraventricular hemorrhage, previous CNS infection, myelomeningocele, prematurity and recurrent shunt revisions have been associated with high failure rates of ETV in all age groups, particularly in infants under 6 months of age. In a long-term follow-up, surgical experience was statistically significant in reducing complications. 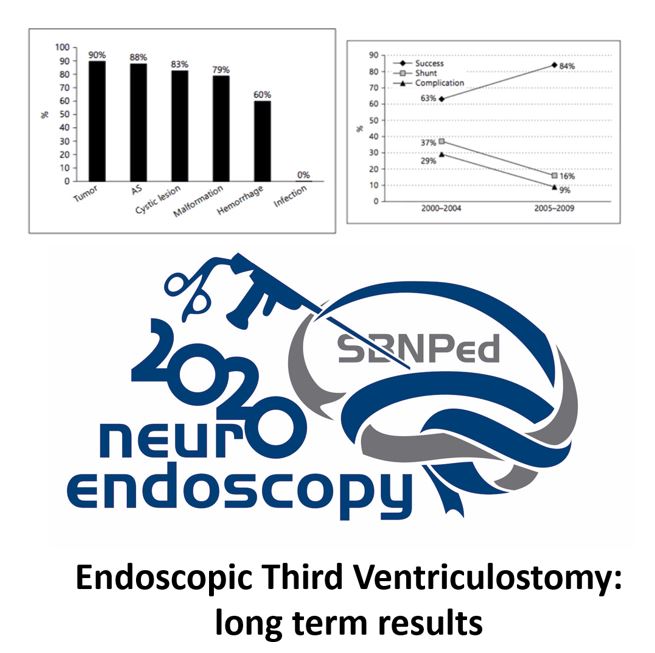