One of the first experiences of shunt implantation in the world occurred in 1949, by Nulsen and Spitz, who implanted a rubber catheter with a ball valve system, from the lateral ventricle to the internal jugular vein [1]. In the 1950s, the shunt systems had great development, especially the Spitz-Holter system, first used in 1956, consisting of the first system produced on a large scale. The second patient who benefited from this new system was Holter's son Casey, who had myelomeningocele [2,3]. From these first American reports, the shunt surgery had great worldwide dissemination in the 1960s.  One of the first CSF shunts in Brazil and Latin America occurred in 1966, in the city of Uberaba, Minas Gerais, by Prof. Francisco Mauro Guerra Terra, founder of the Chair of Neurosurgery at Triângulo Mineiro Medical School, today part of Federal University of Triângulo Mineiro (UFTM). The procedure was performed at the Children's Hospital of Uberaba, at the time one of University Hospitals, and the patient was a 7-month-old baby named Maria Beatriz. The child suffered from hydrocephalus, as a complication of tuberculous meningitis, and was diagnosed by pneumoventriculography, a procedure described by Dandy, and widely used in the era before tomography [4] (Fig. 1). The child was submitted to a ventriculo-atrial shunt (Figs. 2, 3 and 4), with implantation of a catheter without a valve, an option widely used at the time. Besides Prof. Guerra, the surgical team was composed by the then medical students Jaime Olavo Marquez, later titular of the Neurology Department of UFTM, Antônio Luiz da Costa Sobrinho, later a neurosurgeon, who later settled in Presidente Prudente, São Paulo, Brazil Carlos Antunes de Paula, also later a neurosurgeon, who settled in the city of Santos, São Paulo, Brazil and the anesthesiologist Dr. Newton Camargo Araújo, from Uberaba (Fig. 5). There is a postoperative image of the case, showing the success of the procedure (Fig. 6). The surgery had great repercussion in the national media at the time (Fig. 7). 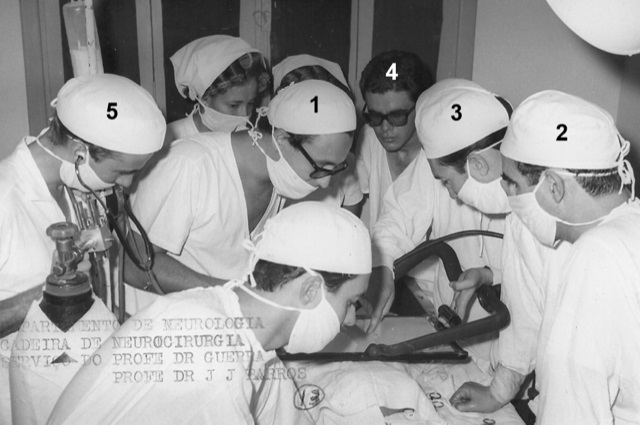